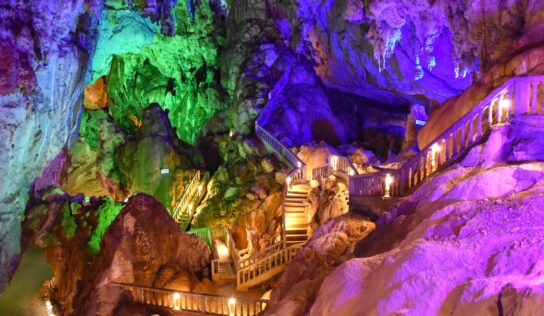 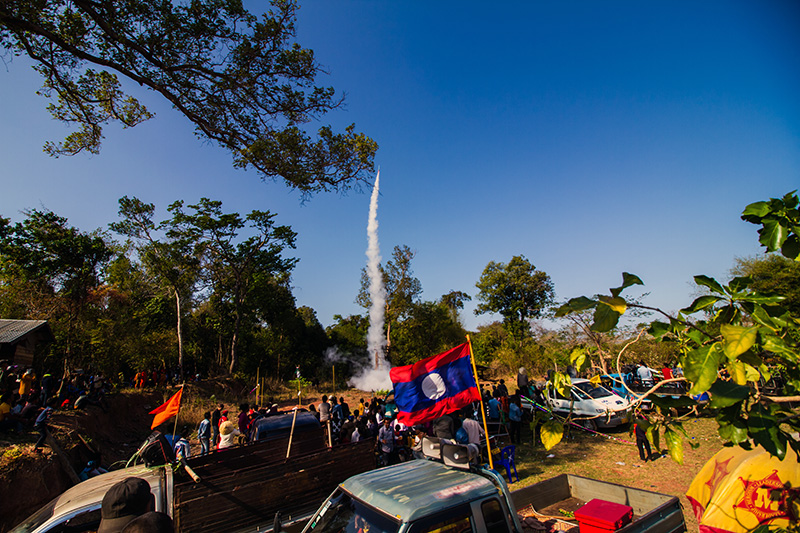 I wake up early to discover Vientiane coated in a light haze. Farmers nearby are clearing land to plant rice in the upcoming wet season using the traditional “slash and burn” technique. The haze gives Vientiane an other-worldly feeling, which seems appropriate if the stories I’ve heard about the rocket festival are true.

I leave my apartment and make my way to Mahasot Hospital, where I am meeting my girlfriend and her colleagues. We have been invited her colleague to travel to her village and take part in the annual rocket festival. I’m not sure what to expect but I’ve been told we’re going to have a great time, and that’s good enough for me.

When I arrive there are a few people milling around, and I discover that some of them have been to the festival before. I try to find out a bit more about what I can expect, but their answers don’t really provide me with much clarity. I’m assured that it will be a good time with plenty of beer and entertainment. Eventually her Lao colleagues arrive and hand us some traditional outfits. This is the first I’m hearing about costumes but I’m happy to take it all in my stride.

I emerge dressed in what I’m told is a traditional farmer’s bathroom attire, akin to a bathrobe. I’m wearing a white singlet that has already turned transparent from sweat, and a chequered cotton towel wrapped around my lower half as a skirt. I’ve seen men in rural villages wearing similar as they make their way down to the river to wash. I’m still not clear on why I’m wearing this outfit but I hope to be enlightened soon. 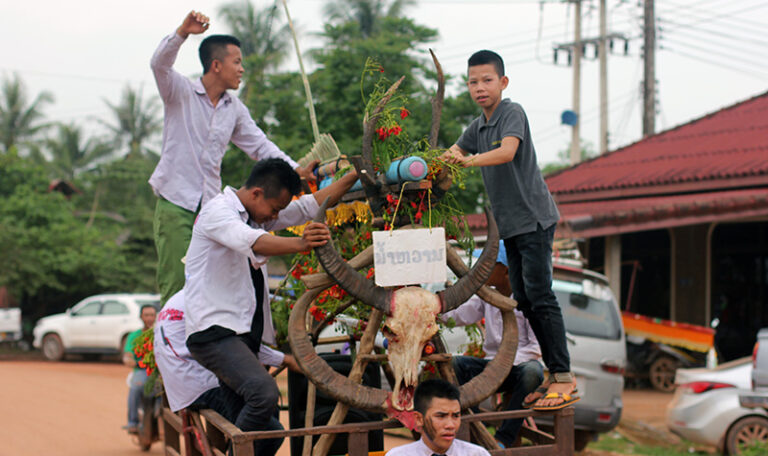 The women are all wearing matching old-lady style sinhs (the traditional lao skirt) of bright colours and equally bright tops. They are busy putting each other’s hair into buns and applying comically large amounts of makeup. When they are ready we are bundled into cars and pickup trucks, and start making our way out of Vientiane.

I’m driven by Anousone, one of my girlfriend’s colleagues. As we are making our way I ask her to explain the festival to me. In return she tells me the story of the Toad King.

The Legend of the Toad King

“Long ago an ugly son was born to a powerful king. The son was so ugly that when he became king he was named the Toad King. Despite his ugliness he was highly respected as great king, with all the animals and people coming from miles around to listen to his sermons. His renown was so great that the Rain God, Phaya Thaen, became jealous of the Toad King’s popularity. Angry with the mortals for abandoning him, Phaya Thaen decided to withhold the life giving rains for seven years, seven months, and seven days.

The Toad King used this moment to launch his attack and rushed his armies up the termite mounds, into the realm of the Rain God. Disheartened and afraid, the army of Phaya Thaen was quickly defeated and the Rain God sued for peace. He agreed that once a year he would send rains so the rice can be planted and the rivers can flow. The Toad King agreed that once a year he would send rockets into the sky to remind the Rain God of his duties and that he and his toad army would sing out when there was enough rain so that the people would know they could plant the rice. Every year the villagers come together to honour the agreement and launch rockets into the sky to ensure that we receive the rains needed for our rice.”

It’s quite the tale but it doesn’t fully encapsulate the spectacle I’m about to encounter. We arrive in a small village, where a huge party is in full swing. It’s barely 10am and I already see groups of people sitting outside their houses, supping Beer Lao. We are herded into Anounsone’s aunt’s house and greeted by her family with glasses of beer, plates of papaya salad and barbequed pork. The pork is sensational but the papaya salad is so spicy I’m worried it might be the fuel used for the rockets.

Out on the street I can see some of the rockets that we’ve come to witness. Most of these are behemoths around five meters long and adorned with eclectic collections of flowers, saffron robes, buffalo horns, brightly coloured wrapping paper, and bamboo carved to look like the spikes running down the spine of the nagas. 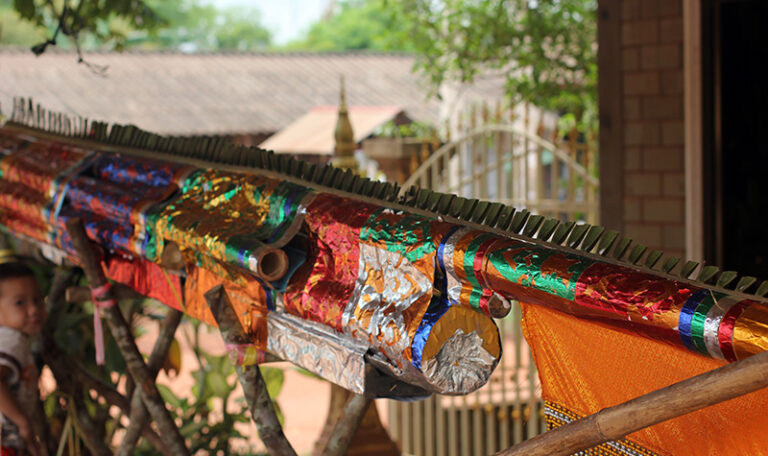 As I walk through the village I am dragged into different parties and encouraged to drink more beer and shots of rice whiskey. Every household seems to be in party mode and very proud to show off their rockets. At least I think this is what’s happening. My ability to understand the language is diminishing with each shot of Lao Lao!

As I arrive back at her aunt’s house I am immediately given more beer and barbequed pork. One of the men of the house speaks excellent English and is excited to tell me about the design of his rocket. His name is Boun, which he takes great joy in explaining is the Lao word for a party. It turns out that Boun has won the competition many times. Unfortunately though, last year his team’s rocket failed to clear the launching pad. He is determined to redeem himself and has spent weeks working on his rocket.

We head over to the rocket sitting on its rickety bamboo stand and his eyes fill with pride. He points out the bacci strings that will give the rocket good luck and help it fly higher than the others. Boun calls over the other men to help load the rocket onto the pickup truck that will carry it to the launch site. The sight of westerners dressed as farmers loading a rocket attracts a small crowd of locals laughing good naturedly at our awkward attempts to get the rocket into a satisfactory position. Eventually our host is satisfied and we all toast to the rocket’s success with more glasses of beer. 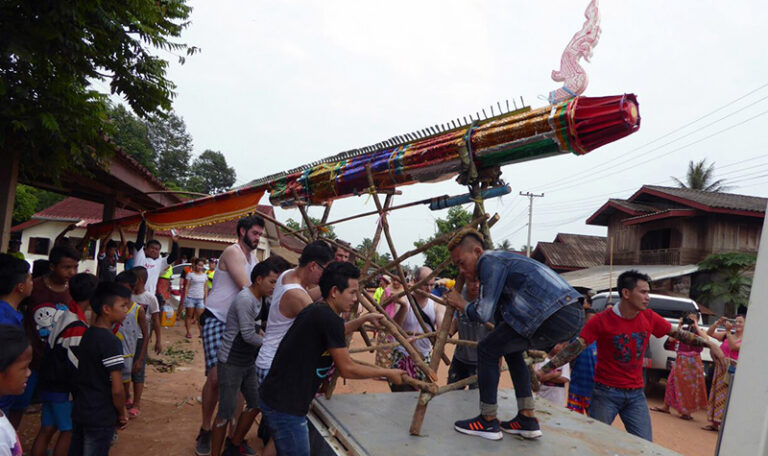 As I look around I noticed more and more sexual imagery. Walking past our party are two young men carrying two puppets making the beast with two backs. It’s been cleverly engineered so that each time they take a step, the puppets thrust their hips into each other. As the men run to catch up with their friends, the puppets reach a fervent pace that draws cheers from the crowd. Or perhaps the cheers are for the pot-bellied man dancing provocatively in the back of a pickup wearing a short red dress and blonde wig. In traditionally conservative Laos this display of hyper sexuality is virtually unheard of, and the villagers are relishing this opportunity to get weird. 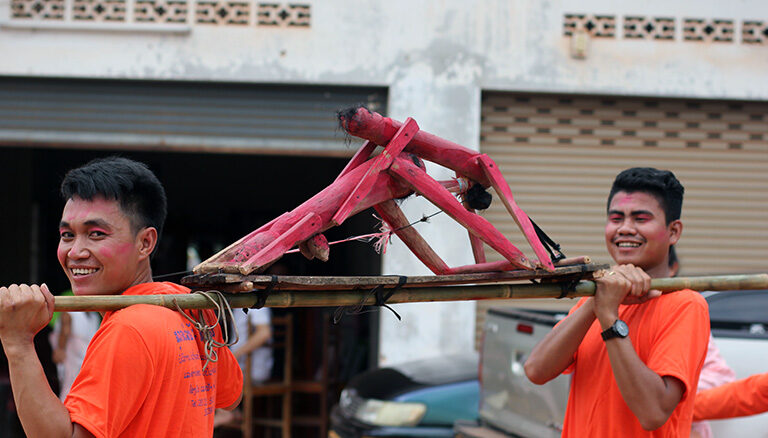 At some unperceived signal our party all get up and join in the procession heading towards the launch area. The field is full of families partying and the sound of announcements being made over a loud speaker. Along the way I get my bottom pinched by an old lady who laughs at my surprised embarrassment. Her family offers to refill my beer and we cheers each other before I make a hasty retreat. 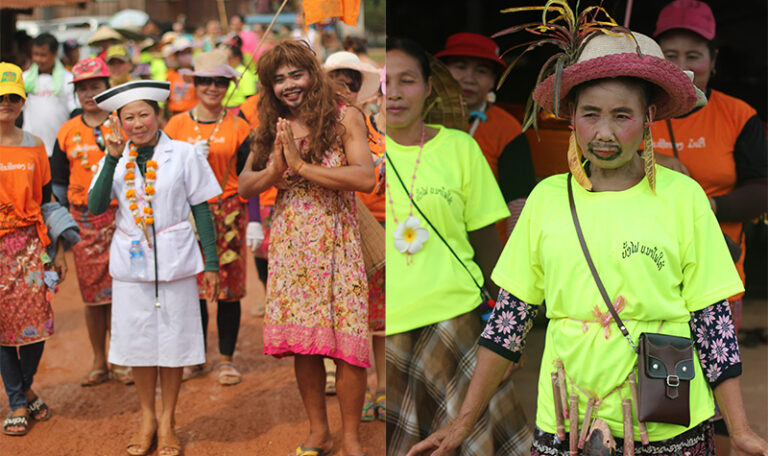 I try to get some information about the cross-dressing and sexual nature of the festival from our hosts. Unsure of its origin, they say it’s always been part of the party.  Or that it’s a good time to make a baby. Why now is better to procreate rather than any other time is unclear.  It’s too late to ask more, as the first rocket is about to be launched.

There is an air of suspense as the PA system warns everyone to stand back from the launch site. There’s a flurry of movement, a wave of smoke and the first rocket shoots into the sky. Its rapid ascent towards the Rain God is swiftly followed by huge cheers from the crowd.

The smoke clears and the next rocket is hastily attached to the wooden frame acting as a launch pad. Men in flip-flops scramble up the rickety scaffold, attaching the PVC pipe full of black powder onto the frame. The loudspeaker blares out a warning to clear the base before the rocket launches high into the sky. The crown cheers as the rocket soars.

Again and again this process is repeated and each rocket is cheered by the crowd. I spot Boun in the crowd calling me over. He wants me to help carry the rocket to the launching platform, and I feel honoured to be involved. A small group of us weave the rocket through the drunken crowd towards the launch site. The officials load the rocket onto the platform as I scurry back and find a good vantage for the launch. 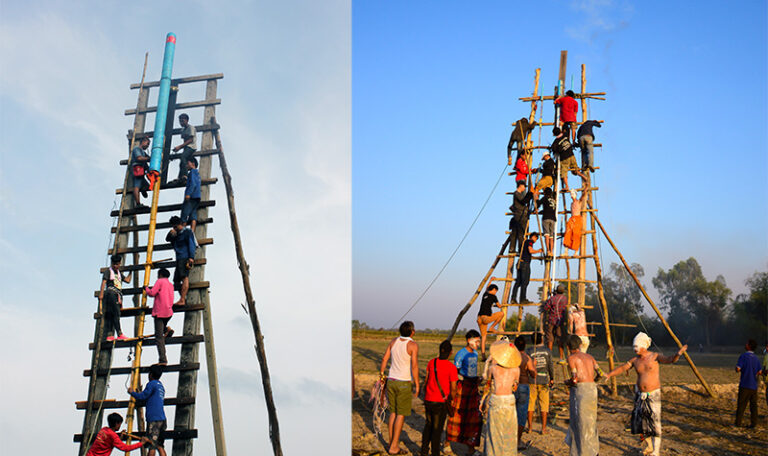 Boun joins me and frets quietly as the fuse is lit. There is a moment of silence before a booming woosh fills the air as the rocket ascends into the heavens. I snap a few shots before being engulfed in a thick wave of grey smoke. The rocket shoots through the air, high above the dry rice paddies. Eventually I lose sight of it in the haze.

Boun is overjoyed with the successful launch and we toast his success with more beer. He is sure that this launch will win him the competition, and undoubtedly bring good rains and a bountiful crop. We toast his success again before I return to Anousone and her family.

It’s late in the afternoon by this stage and Anousone is ready to leave. We bid our farewells to our hosts and make our way out of the festival. The noise and visual overload seems like a distant memory by the time I return to my apartment. The contrast between the pandemonium of the festival and my subdued neighbourhood is striking. I’m not entirely clear on what I’ve witnessed today, but I know I will be back to do it all again next year.

Rocket festivals are typically held in the month of May – June, with specific dates varying village to village.

Story based on the personal experiences of David.  If you would like to share your own experiences of a memorable moment in your Laos travels, get in touch. 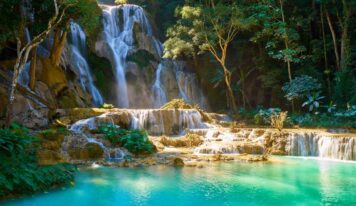 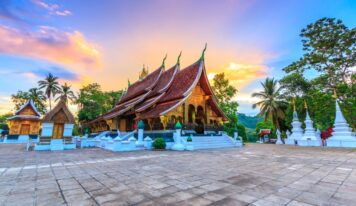 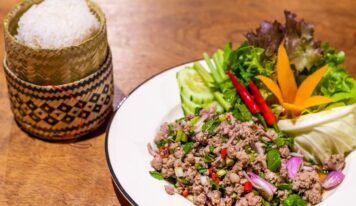